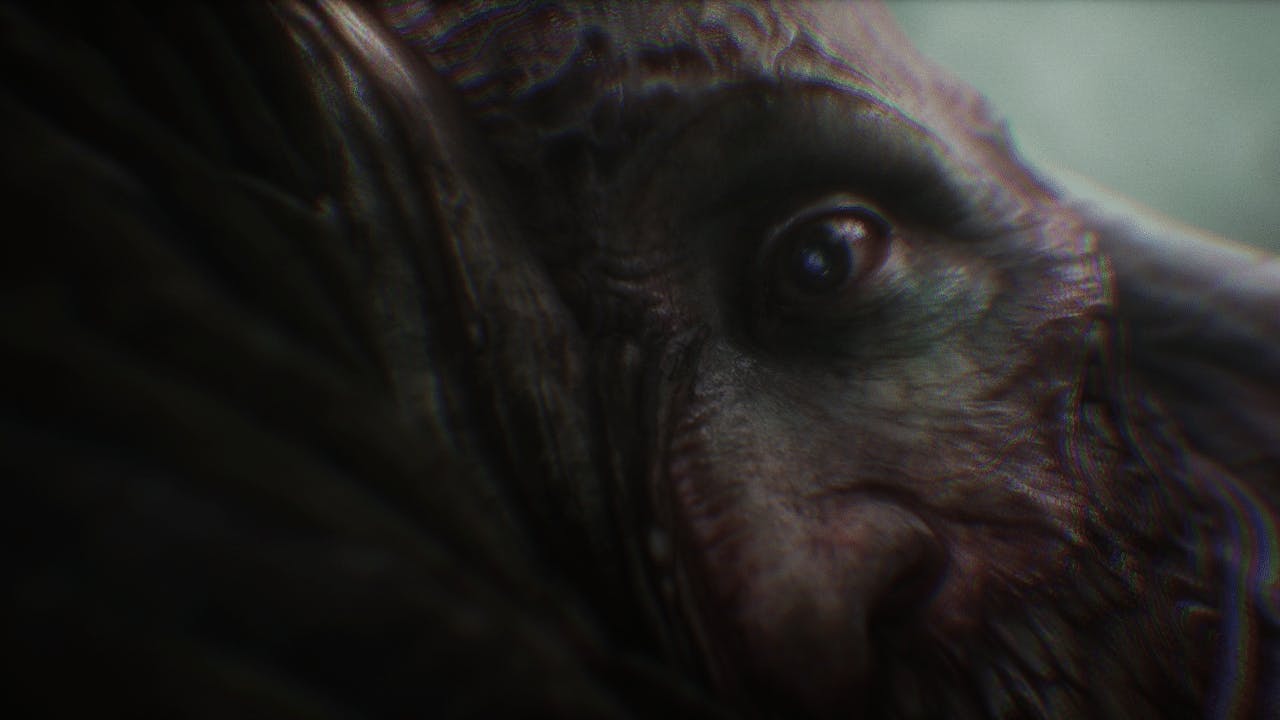 Mechanisms and flesh may be Scorn’s aesthetic but despite these scary looks, the prologue wasn’t a gore fest. Much to my surprise Scorn is more puzzle than horror, when it comes to its mechanics, in the 45-minute prologue I got to play. Unfortunately, the puzzles weren’t intuitive or particularly interesting in this opening. My frustrations were amplified by a lack of visual cues, the general labyrinth design, and — most of all — subpar tutorialization.

Admittedly, the barren and brutal look of Scorn seemed a bit intense for my taste, especially given its horror elements. While things will surely ramp up, I left this preview feeling like folks who are easily scared may be able to stomach Scorn as long as they can appreciate some gross, unsettling visuals here and there.

The preview guide clarifies what to expect from Scorn, describing it as “an atmospheric first-person puzzle adventure of odd forms and somber tapestries” aiming for a “dreadful” environment that provides “lingering tensions rather than jump scares.”

I didn’t encounter any enemies in the prologue but there will be shooting later on, though the team says “Scorn is not a shooter,” implying combat takes a back seat to tinkering with this gooey, factory-like world. Out the gate, disturbing creatures, squishy sounds, and some eerie audio choices were the only scary things.

Even in this brief preview Scorn unleashes some vile, bizarre moments from a twisted humanoid I accidentally impaled to picking up a hand left behind to open a previously locked door. It’s pretty grim but running with a hand in your hand was an amusing sight.

One of the drawbacks of the prologue’s aesthetic is that I quickly got fatigued by how similar everything looked because it made it hard to orient myself. I wasted a lot of time running between rooms and hallways because I kept getting turned around even when I knew where I needed to go.

My biggest pet peeve in puzzle games is when I have ideas I want to try but it takes a long time to execute them, thus discouraging me from experimentation. Scorn’s environmental design and puzzle ethos of creating challenges that cut across several floors gets exhausting because I’d try something above, go back downstairs to see if I've solved it, and have to go back up if I didn’t: all using a rather slow elevator.

Additionally, since everything in the world looks weird nothing ends up looking weird. This makes it hard to spot what might be important or interactable. Fortunately, objects you can interact with appear outlined in white when you get close enough so a bit of trial and error can clear that up.

Flesh Out of Water

Scorn is designed around the idea of just being tossed into a strange world and having to figure things out for yourself. Unfortunately, the mystery comes at the cost of clarity. Plenty of aspects of Scorn’s opening puzzles are video game 101. I interact with whatever I can to see what it does. I stick my arm into a mysterious slot because all my years of gaming have told me that’s how you get powers.

"Mystery comes at the cost of clarity."

But Scorn doesn’t teach me any of that which luckily doesn’t hurt my progress… until it does.

One of my biggest issues with Scorn’s design, especially this early on in the game, is how oddly out of order things are. The first thing you do, besides walk, is open a door and move ahead to reach a device that adds something to your hand/arm after you lodge yourself inside of it. As you begin exploring that room you see a door that can be opened by sticking your arms inside it.

Towards the end of this area you pick up a severed hand to use on a similar door but it doesn’t work because the arm isn’t equipped with that earlier device. This is far from a mind-melting puzzle but it did take me a second to connect the dots because my character had never failed at opening the door or interacting with any mechanism. This is because I was led to get the arm device before I encountered a door.

Another challenge in the prologue was a sliding door type of puzzle. I was presented with two devices, each of which controlled an arm on the wall. The left arm was used for extracting shells and the right allowed me to move shells around.

My goal was to place the glowing shell in the correct spot for the left arm to grab. This is one of the few environmental visual cues Scorn had: the fact that the spot glowed and the shell itself glowed. But I ran into a problem when the shell popped off and fell below because I assumed I’d find it on the first floor. Instead, it turns out I needed to extract the second glowing shell. Granted I’m sure some players could register that the first shell broke apart and did not properly break off but I didn’t and it seemed like an unnecessary subversion of expectations when I hadn’t done any real puzzles in the game yet.

Similarly, towards the end of the prologue you get your first weapon/tool but, if you explore in the order of the rooms, you’ll encounter objects you can’t interact with (because you need that gun). And even the gun itself is hidden in a mechanism on the floor, that frankly just looks like part of the floor, that doesn’t rise until you approach it from the front. Scorn’s opening ends with you sending two pods to the end of the tunnel but when you get there you have to control a crane that moves three of the pods into a giant structure in the center. Where did the third pod come from? I suppose it was already there but why not just keep it to the two pods I moved?

I’m all for a game that lets you explore and figure things out but given how unusual the setting is, how many rooms there are in these areas, and minimal UI, dialogue, or onscreen prompts Scorn’s opening felt unnecessarily obtuse.

While Scorn’s aesthetic is meant to be offputting in an appealing way the puzzles and environmental design were what made me wince. I’m sure there will be players who latch onto the world and figure things out more easily but if I’m struggling this much in the prologue the full game seems like more than I’m willing to work through.